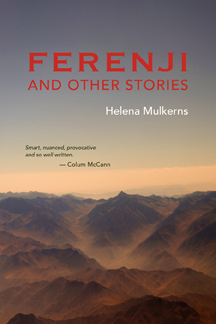 In 2016, Doire Press of Galway published Helena’s first book, FERENJI, a themed collection of stories set in the world of international workers in developing, conflict and post-conflict areas of the world.  For more on the debut title, click here or click on this page to purchase it.

Helena’s fiction – about two dozen published short stories in all – has appeared in international anthologies and magazines ever since “The Package Man,” was first published by Ciarán Carty in New Irish Writing, and shortlisted for the Hennessy / Sunday Tribune Literary Awards in 1991. The first anthology she appeared in was  Ireland in Exile, edited by Dermot Bolger, with a story called “The Suitcase,”

Since then, her work has appeared in collections and literary reviews in the United States, Ireland, Australia, Britain and Croatia. “Famine Fever,” which appeared in a collection entitled Cabbage and Bones, edited by Caledonia Kearns (Henry Holt, New York 1997), was shortlisted for America’s Pushcart Prize.

In 2003, as part of her Masters in English Literature and Publishing at the National University of Ireland, Galway, she published Turbulence – Corrib Voices – an anthology of emerging writers from NUIG’s Masters in Writing, a second edition of which was published in Autumn 2013.  In 2004, as part of her work with the United Nations, she wrote text for and edited the photographic book UNMEE in Pictures, featuring work by Uruguayan photographer, Jorge Aramburu.

In 2009 her story ‘Mare Rubrum’ was shortlisted for the Francis MacManus Short Story competition. The following year, she received a Bursary from The Arts Council of Ireland to work on a themed short fiction collection. In December, 2013 she published Red Lamp Black Piano, an anthology of writing by authors and poets who have appeared at the Arts event she founded in 2009, The Cáca Milis Cabaret.  In July 2015, she signed with Doire Press, an award winning literary publishing house in Galway, who have now published her first book, FERENJI:

“This first collection showcases all her gifts – smart, nuanced, provocative and so well written.” – Colum McCann

“Finely written and astutely observed, both in terms of the human heart and of the physical terrain they skillfully traverse.” – Dermot Bolger

“Ferenji is an engaging and highly readable collection that seeks to show the humanity behind the wars … so often dismissed as ‘other'”. Sarah Gilmartin, The Irish Times

For updates on new work and her first book, Ferenji, you could subscribe to Helena’s blog for updates here or contact her here.