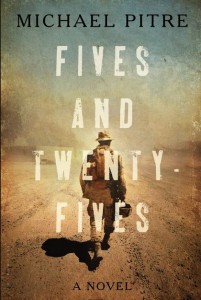 So, how to describe this debut novel receiving multiple favourable reviews? You can say simply, it’s a good read. It has strong, likeable main characters. It has a well-constructed plot and a solemnly satisfying conclusion. You could say that the dialogue is plausible, and the fact that its author himself served in Iraq makes it ring true.

Over and above the inarguable power that comes from a writer’s first hand knowledge of his subject, there is a heartfelt craft evident here that proves the dictum, “fiction can be truer than non-fiction.” Freed of the restrictions or embellishments of memoir, Michael Pitre brings us vividly into a world that most readers are not acquainted with and interprets it with accuracy, poignance and humor.

At first seeming like a possible easy read, with its straight prose and dialogue, the novel in fact reveals the stories of its main protagonists through means of alternating chapters, both present day and flashback.

These protagonists are strong, memorable. We meet, dislike and then get to deeply like the misplaced young Lieutenant Donavan. Dodge, a smart young Iraqi engaged as an interpreter is no cardboard cut out, but a witty, complex, passionate young man with a dramatic back story who is thrown into circumstances that have transformed his life utterly. Corpsman Doc Pleasant is a tough guy whose deep flaws are torn open by war. Sergeant Gomez is one of those characters who will fascinate and stay with the reader forever – especially by the end of the novel, when she becomes a symbol of the true meaning of combat. Skillfully portrayed as ruthless Lioness, the author lets her armor down just enough for us to know her as a woman and not just a soldier.

“Fives and Twenty Fives” not only relays the intensity of high-tech contemporary combat, but also the loneliness and confusion of many who return, adrift, to life at home. This aspect of the novel, a little in the style of the classic post-conflict piece, Speaking of Courage by Tim O’Brien, is powerful yet unsentimental.

Following a climactic battle scene that ties together many of the plot’s threads, the novel concludes with a redemptive road trip – an appropriate ending to the book, that answers the last of the reader’s questions about the fate of its characters.

Lastly, one key aspect to “Fives and Twenty Fives” is that, while set in one of the most passionately opposed and disputed wars of recent times, it is wisely free from politics, choosing to focus instead on people and not polemic. Thus, instead of a novel about war it transcends as a study of humans in and post war – with just enough humanity to touch the heart of the reader.