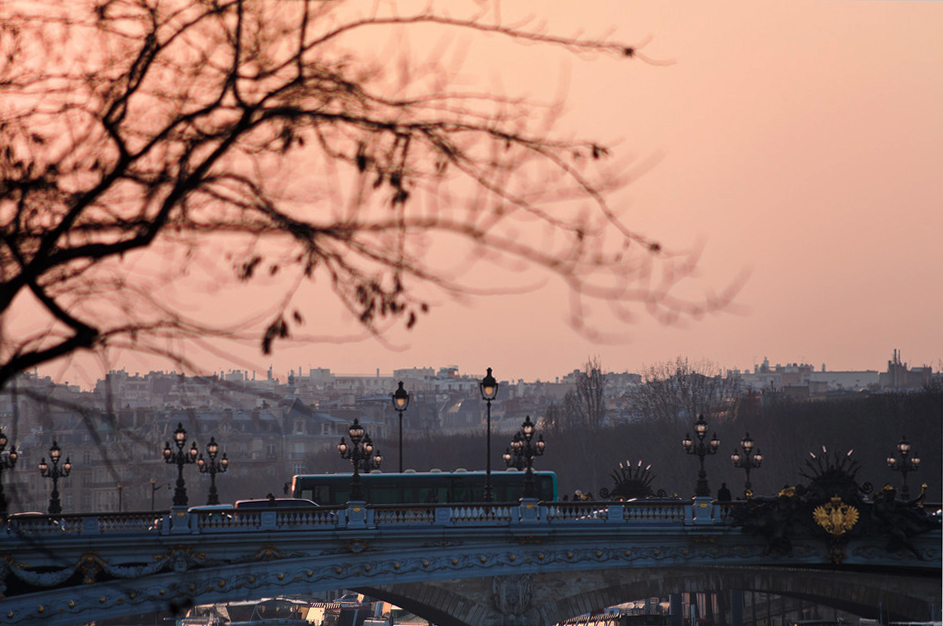 It was this, the deceptive, chilled sunlight, that kept her in a constant vague illness. Just a cold – but it was always there, getting better sometimes but never really going away. Emerging onto the Rue de Rivoli, she began to cross the road before the lights had turned, following the crowd. Slowing down a little as she began to cross the square in front of the Hotel de Ville, she scattered several flustered pigeons and glanced up at its impossible facade. The stone was tinged gold in the evening light, it’s thousands of pompous little statues frozen in lofty animation, an arrogant advertisement for city and empire, its rows of windows mirroring the blue of the sky and the glittering, icy Seine.

She sighed, and hurried into the post-office on the ground level. Inside, there was a line going the full length of the place for stamps and express letters. Shit. She gauged the length of the queue, and how long it would take to get through it, but there was no remedy but to wait her turn.

The line moved along at a snail’s pace. She was getting fed up. She must have looked at every stupid thing in the room.

The man in front of her smelled badly of garlic and cooking and she was sick just standing behind him. The man behind her had been staring at her solidly, unflinchingly since he joined the queue. She turned and glared at him. Behind him was a rather scruffy, nervous looking African man of about 30 wearing glasses, followed by a prim little French lady in a blue woolly coat.

There was another delay at the hatch ahead, and by the time she reached third from the top, she had been waiting 15 minutes. As the man before her began to speak through the screen at the girl, she knew she’d probably be waiting 15 more. The guy could hardly speak French. This didn’t impress the Post Office clerk, a woman of about 28, blonde and skinny, and extremely irritated.

“Monsieur, postal services to Cambodian refugee camps are cancelled, as of last month. As they are to Gabon, Mozambique and Syria. No more, Finished. “ The man looked at her patiently.

“No, it’s going to Thailand. Not Cambodia. Near the border in Thailand.”

“No, no. Services are cancelled. New rule! Next please … “

The man looked momentarily distressed. It was obvious he didn’t understand what the woman had said. Then, smiling, he gave a little nod of his head and began to speak French again with such a pronounced accent, it really was quite difficult to make out what he was saying.

She looked at him. He was a small man, painfully skinny, his clothes hanging off him like a scarecrow. His shoes were falling apart and he wore a navy crimplene jacket with very wide lapels and no tie. He smiled forbearingly, looked down at the package in his tiny, fine hands, and began to explain again.

“This package is going to Thailand.”

“What? I can’t understand what you’re saying. Speak up.”

“It is going to Thailand.”

He appeared to be addressing the woman most politely, but she could see a grave, concentrated hatred somewhere in his eyes as he spoke. It was a calm, but strong anger camouflaged very carefully by a dispassionate smile. She was a little taken aback.

“What is he saying, for God’s sake, I haven’t got all day,” screeched the clerk.

“I have sent things before.”

“What? she addressed the people waiting. – What is he saying? I haven’t a clue!”

The man didn’t take his eyes off her, and maintained a pleasant expression, despite her rudeness. She wasn’t having any of it. The woolly coat lady pursed her lips and nodded in approval.

“Move along. Move along, Monsieur! You aren’t the only person in line here, and I have to get on with my job …”

The man didn’t move. Now, the resentment had ebbed. His eyes only showed a mixture of pain and disappointment. She looked at his face, haggard so as to be almost skeletal. It became suddenly apparent to her that this man was very tired, and a lot older than he looked. His hands began to tremble as he clutched the parcel desperately. He had a sort of twitch that, while not noticeable before, now became quite pronounced. He stammered something else which was immediately screeched down by the woman.

“Excuse me …”   Here we go, she thought, barging in as usual. She might as well. She enunciated slowly.

“They have made a new regulation, Monsieur.”

The man looked at her haughtily, the glimmer of anger in his eyes flaring up again. Of course, it was none of her business to talk to a man in a language that wasn’t hers. But that bitch behind the hatch was worse.

“They are not delivering packages to the Refugee Camps anymore at all – they have stopped the service. See?”   She pointed at a printed sign taped to the glass at eye level, but he didn’t look. He was shattered. Glancing down at his parcel, his anger seemed to turn to ineffable sadness. He frowned as if to camouflage his defeat, still unmoving.

“Is there no other way to send it, Madame?” The woman exploded.

“Who do you think I am? Mind your own affairs, Mademoiselle. Since you’re so good at communication, maybe you can teach him French.”

“The gentleman was most likely educated in French, Madam.”

“Well, Mademoiselle, he doesn’t seem at all educated to me. Now – move along!”

Suddenly the African behind them pushed his way roughly to the hatch and hissed in a barely controlled fury.

“You make me sick! How dare you treat a human being like this? You French, in fact, are bloody sick!” He pointed at the woman.   “You, you are inhuman!” The woman behind the partition stood up and moved back a step.

“Get out! You have no right to talk to me like that. Get out!”

“This putrid society as created people like you – and your National Front bastards! With absolutely no respect for humanity, for basic human dignity. Who gave you the right to treat this man like this? Who?”

The African voice, in its emphatic, precise French, was rising at each phrase. Clucking shuffling and sighs sounded around the Post Office. A couple of Algerian youths leaned out of the telephone booth to observe the fray, eyes glistening.

“This very man has probably suffered most of his life from your colonial exploitation and mishandling. He has probably served your country more than you ever can! Fighting in your bloody war!” He was absolutely screaming now, sweating face, hands clenched.

“And now, when he asks you an honest question you treat him like a dog … “

The Asian man was staring at the African with an expression totally unfathomable. It could have been distain, it could have been admiration, it seemed mostly to be disbelief. The tirade continued.

The little woman in the blue woolly coat pronounced sharply:

“If you dislike us French so much, Monsieur, why don’t you go back where you came from?”

There was a murmur of agreement, and a simultaneous grunt of disapproval from those present. The young North Africans were firing up and ready to roll, and she began to get nervous herself. The dreaded cry of the uniform sounded in her ears … Papers, please …

Some threw their eyes up to the ceiling and just groaned. It was the city center, Friday at 6:45 pm, and there were important things to be done. The man, clutching his parcel suddenly touched her arm, and in American-tinged English, he said,

“Not okay!” roared the African, in English.   “Ca va pas, non? She must apologise to this man.

Groans fought protests and calls for an apology, and a nasty argument had started up half way back down the line. Then a uniformed post office employee darted out from behind the counter, and announced the police had been called. The African began backing up towards the door, muttering about apologies as he disappeared. The group of youths at the phone booth were already gone. She panicked, heading blindly for the exit. The package man held the door open for her, and followed her out quickly. Headline: Loud-mouthed Foreigner deported yesterday after racial incident in post office.

They walked, and then began to run towards the river as a police van pulled up outside the Post Office behind them. They tore across the square and down to the underpass that went beneath the traffic: it stank, their galloping echoed crazily around the walls.

Finally they emerged into the air again, and after she’d got her breath back, she thought of the fine line between tragedy and farce and began to laugh. Her companion responded with a beaming smile and a short, nervous giggle, finally relaxing his death-grip on the parcel and shivering a little in the dusk. She was surprised at how fast the light was fading. They began to walk along the quay. To their right the cafes were illuminated, with people at the window tables looking cosy and ignoring the view of the Pont St. Marie and the darkening river.

At the bridge they stopped, and she looked down, wondering how to take leave. The man suddenly laughed, twitched, asking in English

“I think so.” She smiled.   She felt less ill at ease and so shook his hand. “I’m sorry about your parcel. “

Looking up, her eyes met another expressionless gaze, and she glanced away again quickly, out across the Seine, shivering suddenly.

He smiled – this time not without expression, but again an unfathomable mixture of melancholy anger and gentleness.

“Cold here all the time,” he said.