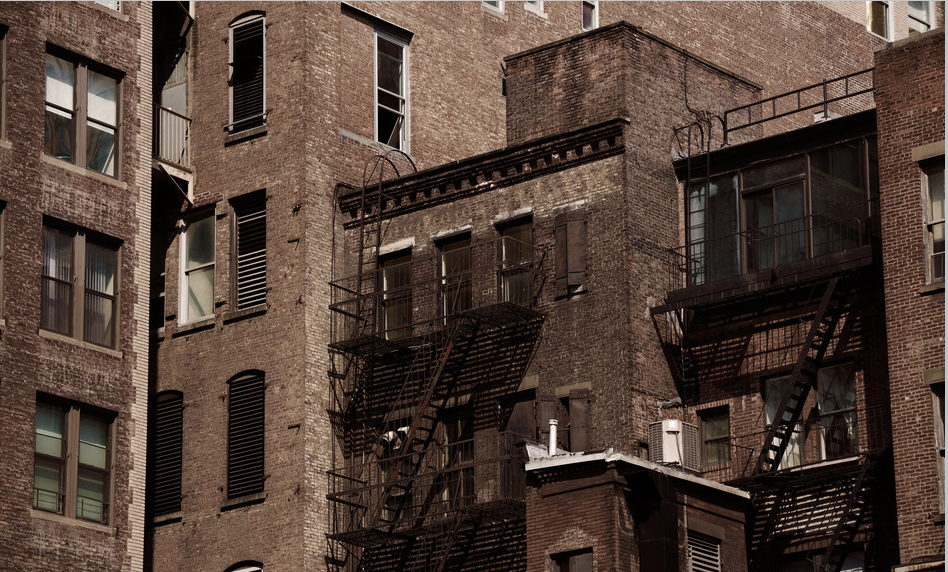 Joaquin kicked the air conditioning once more as he passed the window, finally deciding it wasn’t worth trying to fix again. Screaming rose through it from the street; the kids from the basement apartment were back from school. How could they rush around like that in this bloody furnace?

He started at his tepid beer, flattening in the heat. He was too lethargic to shift himself to the icebox for another. He listened to the couple next door fighting again. ” Cállate, coño, imbécil de mierda!” ” Y tu madre, pendejo!” The crashing and shouting had been going on all afternoon. People were animals. Another thud came through the wall followed by a whimper and a door slam. He turned on the radio. A talk show; gimme a break.

“Yes people, it’s a hot, hot afternoon all over the Tri-state area, and just a cool 102 degrees here in Midtown. You’re listening to “Strictly Personal” with Craig Overcash on your favorite radio station. And before we cut for a little break we have Mrs. Marjorie Wilson on the line right now, who wants to tell us about her husband’s embarrassing habit … ”

He picked up the paper, now several days old. More scandal. “Gays in Panic” – “AIDS corpses disposed of by Army”. It was mass hysteria. At this stage, funeral parlours wouldn’t take in the stiffs. The mariconcitos were losing their jobs – even having problems getting their clothes pressed. It was the only topic everywhere you went, for God’s sake, Joaquin was just about fed up with it. Why didn’t they just get out of everybody’s faces and go off to some desert island, or something.

“Okay, Marjorie, so this is difficult to relate to, but didn’t you realize your husband had this problem before your marriage?”

“Well, you know, Marjorie, fuck that.” snapped Joaquin, switching it off. But that didn’t do much good since that madwoman Señora Carmen downstairs was listening to the Puerto Rican station. It was pretty disgusting, this place. Junkies and weirdos, he was sorry he ever answered the ad for the sublet in the first place. But it was cheap. He’d just better get some work soon, he thought, turning his radio dial viciously. At last, he found Aerosmith on some other station and turned it up full blast to drown out the blaring bugles and advertisements in bad Spanish. He walked over to the icebox, confronted along the way by the flies dining on leftover pizza lunch.

Abruptly, he jerked back and turned off the music as the sound of the phone screeched through the room. The phone. That stupid Mexican woman from the Consulate reception last night, maybe.

“Hello? Ah, Señora, how nice to hear from you. Yes, how are you. Yes, of course I remember. Oh sure. Sounds fantastic, I’d love to talk about it. I did that kind of stuff when I worked in Milano – high quality pannelling, finishing – that kind of thing. I even have some pictures of what I’ve done, I’ll bring my portfolio. Yes, I can make that, okay – see you then …”

He rushed to the clothes line, tied from one window to the door of the bathroom, and cursed as he felt his favorite shirt. Still wet, shit. Never mind. The gray silk one was clean and the black pants. He showered, shaved and fixed the hair carefully. This old sarcófago had to be impressed. He let the machine play for the next call and Marina’s gushy Brazilian tones flooded the room. Shit. If she thought he was going off to Eurotrash-ville again tonight she had another thing coming. Things were just about to take off for him now, and she was beginning to be a pain in the ass. Of course, she’d helped him a lot with all her Papa’s connections, yeah. Introductions were important. But still.

He brushed the ashes off his portfolio and fished his carefully forged Greencard out of the back of a drawer. Social Security card, Driver’s Licence. Joaquin prided himself on being a man that never did things by halves. He got a certain satisfaction out of knowing he was away on a hack – he’d go home at Christmas and find the same vagos on the same stools in the same bars as the night he’d left. Meantime he was wearing the silk shirts. This job looked like a particularly good bet, once he got around this woman. And Joaquin knew he could be more charming than most in 102 degrees. Especially to rich Mexican widows, he told himself.

His neighbor, of all people, was emerging from the elevator as he closed his door. Shooting daggers as he pushed past, he clutched a small bunch of withering flowers. God, just the job for her black eye. The smells turned his stomach as floor after filthy floor passed his eye level through the grid. Obscene graffiti covered the walls and it looked like a dog had puked in one corner.

The stairway which zig-zagged up around the elevator shaft was the darkest place in the building. The only light hitting the walls in the entrance hall slivered through the window above the doorway, which was shut to keep the heat out. On the very top floor the junkies used to come in and shoot up just at the roof exit, so there was sometimes some air if it was left open. But otherwise, without air conditioning, the place just became a dark oven in the pit of the building. It gave Joaquin the creeps. One of these nights …

He slammed the grid shut, and stood a moment in the dimness to light a cigarette. Suddenly, he heard a shuffle on the other side of the hallway. Oh God. He could see nothing. There was a sniff, but still nothing moved. Oh come on, not now, please … Reaching out in a panic, he hit the light switch and stepped back quickly, ready to defend himself.

A man was standing a short distance away, supporting himself against the wall. Shoulders slightly hunched, he stared fiercely at Joaquin with, surprisingly, a mixed expression of self-possession and all-consuming terror. Although he was clearly only in his early thirties, he had hair so thin he was almost bald. And the face was ancient – it looked as if it were in an advanced stage of decay. In the garish light of the bulb, it was thrown into dramatic relief – reddened eyes sunken behind protruding cheek-bones with only shadows underneath, emphasizing a horror-movie style emaciation. The skin was a dull gray, broken by large, dark blotches and spots. Joaquin stared at the heavy woollen overcoat; although he held it tightly closed, the man was shivering violently all over. He blinked nervously without moving. His whole aspect evinced a fundamental fact that brought a quick layer of sweat out over Joaquin’s newly-showered back.

Joaquin looked away and headed briskly towards the door, in a panic. Fuck. The state of the guy, the state of him.

Heartdive. He hadn’t heard; he continued on.

“Eh, please … before you leave … ” The man began to speak in excellent, accented Spanish.

He stopped for a moment, not knowing exactly why. It was contagious, you know. But God love the miserable bastard, all the same. Telling himself it was his good deed for the year, he turned around, managing a half smile. This had better be for real. The man hunched forward even more and the terror seemed to subside as he spoke.

“My suitcase …” his voice was weak and hoarse and he spaced out his words carefully, joltingly. ” … I can’t carry it any more …” He wheezed again. “It’s too heavy for me … ”

“No problem!” Joaquin braced himself, placed his portfolio against the doorway, and stepped back across the hall. He felt saintly, magnanimous. He’d tell this one to Marina later and freak her out. Despite his smile, he was pretty scared, alright. Shocked, even. He kept a certain distance too – just do it and go. He picked up the suitcase and carried it into the elevator.

Then he waited, holding the heavy door open for several minutes as the man filed past him, slowly. When he’d shuffled over on a level with Joaquin’s eyeline, he lifted his head without warning suddenly and caught him straight in the eyes. The confusing transmission was momentary, bolt-like: sweaty hospital beds, wires, tubes, nightmares, machines, drugs – prolonged and extreme struggle. Possibly what confused Joaquin most was a kind of edge, a frame that contained all of this, that was hard to define. An old-fashioned, biblical term whispered out from the back of his brain. It sounded something very like: courage.

He didn’t look at the face again, but it filled his head as the guy turned around once inside the elevator, hunched and still clutching the woollen coat over his chest.

The machinery screeched into motion as the elevator ascended, and the light went off in the hall. Joaquin stayed there in the darkness for a time, kicking his empty matchbox around the floor blindly.   He finished his cigarette with unusual slowness before looking for the portfolio and heading out into the stifling day. He winced as he opened the door to the street, the light was blinding and the heat hit him like an oven blast.

He felt distinctly sick, his hand shook visibly as he ran it over his forehead, and his features had fallen into the old nervous frown he’d spent so many years trying to get rid of. A small perspiration stain was already forming down the back of the grey silk shirt. He began to run suddenly, butting through the hoard of screaming kids outside the door.   Dealers accosted him from doorways:

“Smoke, Coke, Any high you want … ” Girls in large gold earrings pushed their prams in his path. He tore across Houston street, barely missing a truck at the lights, incurring the wrath of its driver who roared at him coarsely in Creole.

A taxi – quick – the fastest possible conveyance to somewhere light-filled, clean and air-conditioned. He was going nuts, all the cabs seemed to be full. He tried hard to keep his mind on looking for one, on the encroaching interview. On what he would lie about to this snobby Señora. On Marina. On anything. Only the day was tainted with the terrible stink of raw truth, like nothing he knew. Like the freakiness when lights dim subtly in a power surge, like the stereo just died at his party.

Park Avenue’s flower-bordered luxury glided by outside, and by the time the cab passed Fifty-Seventh, Joaquin had almost managed to forget the face. Craig Overcash was still on the fucking radio, talking now to a young prostitute who was bearing her soul. Joaquin asked the driver to turn off the station, but he didn’t speak English. So he sat there wondering how much a hired gun from Detroit would cost to take care of Craig …

“Yo! Carla honey, it sure is a jungle out there babe, and we thank you for sharing that with us … After the commercial break, coming up we have the latest on Madonna … ”

Music blared over the voice track, and as Joaquin spotted his destination coming up on the right he ordered the cab into the curb and took out his wallet. Sweet Mother of the divine Jesus, the one thing he just couldn’t clear out of his head was that suitcase. A plain old damn cardboard suitcase. It had been completely empty.