On cousins and other intergallactic connections

Cousins.  Long-distance-mysterious, or next-best-thing-to-a-sibling – sort of bonus family members that you’re always intending to be closer to.  But not always successfully. In our family, it’s usually the latter. Never a terribly close bunch, and with the usual Irish emigration issues thrown in, they’re always people I would like to be closer to, but the best laid mice …

Three-thirty a.m. of a post-Saturday night sortie:  girl talk at the too-brightly lit kitchen table, over tea and ridiculous biscuits.  April and me having the long-overdue cousinly catch-up.  We remove to the patio outside, to indulge April’s still-bad-girl-at-heart cigarette habit, hovering in the seaside darkness, with dawn getting ready backstage in the far clouds.

Conversation stumbled on a communication issue, where one of us is having a problem getting through to an official entity and encountering increasing bother.   April pulls on her nicotine stick, which momentarily illuminates her bright, last-gasp-of-the-night eyes.

I put my hand on her arm, with cousine affection, and slowly whisper:  “It’s what you read just under the password text box on my log-in screen.” 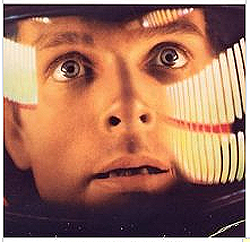 “The sudden realisation that he’s completely and utterly fucked …”

“I use it like people use ‘don’t panic’ from Hitchhiker’s.”

“It’s such a perfect expression of sheer, hopeless terror!”

So, with random lack of logic, for my cousin April, this phrase from a 1968 movie finale means exactly the same thing as it does to me.  A useful expression to denote fear when confronted by denial, especially in the context of an official body or even a person.  Used separately, by said cousins, down the years, with no previous mention.  I have never, ever heard anyone else use this phrase in a similar context.

We stand in the dark garden as April finishes her cigarette.  Ah, yes … the possibilities of gene-sharing, inter-cousinly connections blaze.  The music comes up – and the pair of us link arms, burst into a rousing chorus of “Daisy, Daisy” and hail the nearest alien craft, ascending into the lime-tinged beams just as the dawn breaks.

“Nah, that’s another thing.  You have to switch to MAC, obviously … “

And it’s five o’clock before the two of us actually get to sleep.