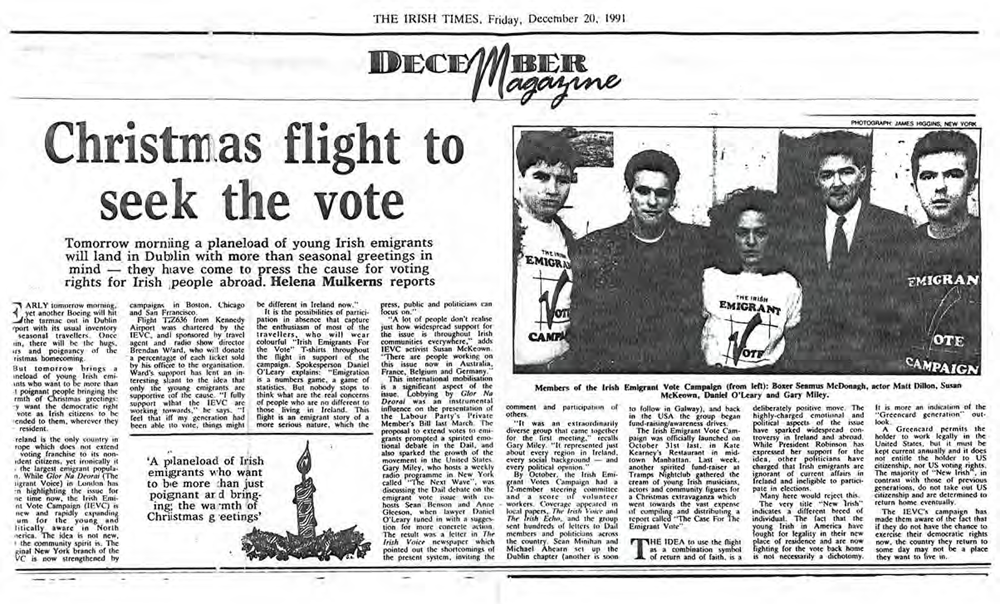 TO READ THE FULL TEXT OF THIS ARTICLE, CLICK HERE:

Christmas flight to seek the vote

Tomorrow morning a planeload of young Irish emigrants will land in Dublin with more than seasonal greetings in mind — they have come to press the cause for voting rights for Irish people abroad.  Helena Mulkerns reports.

EARLY tomorrow morning, yet another Boeing will hit the tarmac out in Dublin airport with its usual inventory of seasonal travellers. Once in, there will be the hugs, tears and poignancy of the Christmas homecoming.

But tomorrow brings a planeload of young Irish emigrants who want to be more than just poignant, bringing the warmth of Christmas greetings. They want the democratic right to vote as Irish citizens to be extended to them, wherever they are resident. Ireland is the only country in Europe which does not extend the voting franchise to its non-resident citizens, yet ironically it has the largest emigrant population. While Glór Na Deoraí (The Emigrant Voice) in London has been highlighting the issue for some time now, the Irish Emigrant Vote Campaign (IEVC) is a new and rapidly expanding forum for the young and politically aware in North America. The idea is not new, but the community spirit is. The original New York branch of the IEVC is now strengthened by campaigns in Boston, Chicago and San Francisco.

Flight TJZ636 from Kennedy Airport was chartered by the IIVC and sponsored travel agent and radio show director Brendan Ward, who will donate a percentage of each ticket sold by his office to the organisation. Ward’s support has lent an interesting slant to the idea that only the young emigrants are supportive of the cause. “I fully support what the IEVC ate working towards,” he says. “I feel that if my generation had been able to vote, things might be different in Ireland now.”

It is the possibilities of participation in absence that capture the enthusiasm of most of the travellers, who will wear colourful “Irish Emigrants For the Vote” T-shirts throughout the flight in support of the campaign. Spokesperson Daniel O’Leary explains: “Emigration is a numbers game, a game of statistics. But nobody stops to think what are the real concerns of people who are no different to those living in Ireland. This flight is an emigrant story of a more serious nature, which the press,public an politicians can focus on.”

“A lot of people don’t realise just how widespread support for the issue is throughout Irish communities everywhere,” adds IEVC activist Susan McKeown. “There are people working on this issue now in Australia, France, Belgium and Germany.”

This international mobilisation is a significant aspect of the issue. Lobbying by Glor Na Deorai was an instrumental influence on the presentation of the Labour Party’s Private Member’s Bill last March. The proposal to extend votes to emigrants prompted a spirited emotional debate in the Dáil, and also sparked the growth of the movement in the United States. Gary Miley, who hosts a weekly radio programme in New York called “The Next Wave”, was discussing the Dail debate on the emigrant vote issue with co-hosts Sean Benson and Anne Gleeson, when lawyer Daniel O’Leary tuned in with a suggestion for more concrete action. The result was a letter in The Irish Voice newspaper which pointed out the short comings of the present system, inviting the comment and participation of others.

“It was an extraordinarily diverse group that come together lot the first meeting,” recalls Gary Miley. “It represented just about every region in Ireland, every social background – and every political opinion.”

By October, the Irish Emigrant Votes Campaign had a 12-member steering committee and a score of volunteer workers. Coverage appeared in local papers The Irish Voice and The Irish Echo, and the group sent hundreds of letters to Dail members and politicians across the country. Seán Minihan and Michael Ahearn set up the Dublin Chapter (another is soon to follow in Galway), and back in the USA the group began fund-raising/awareness drives.

The Irish Emigrant Vote Campaign was officially launched on October 31st last, in Kate Kearney’s Restaurant in mid-town Manhattan. Last week, another spirited fundraiser at Tramps Nightclub gathered the cream of young Irish musicians, actors and community figures for a Christmas extravaganza proceeds from which went towards the vast expense of compiling and distributing a report called “The Case For The Emigrant Vote.”

THE IDEA to use the flight as a combination symbol of return and of faith, is a deliberately positive move. The highly-charged emotional and political aspects of the issue have sparked widespread controversy in Ireland and abroad. While President Robinson has expressed her support for the idea, other politicians have charged that Irish emigrants are ignorant of current affairs in Ireland and ineligible to participate in elections. Many here would reject this.

The very title “New Irish” indicates a different breed of individual. The fact that the young Irish in America have fought for legality in their new place of residence and are now fighting for the vote back home is not necessarily a dichotomy. It is more an indication of the “Greencard Generation” outlook. 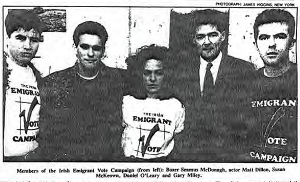 A Greencard permits the holder to work legally in the United States, but it must be kept current annually and it does not entitle the holder to US Citizenship, nor US voting rights. The majority of “New Irish,” in contrast with those of previous generations, do not take out US citizenship and are determined to return home eventually.

The IEVC’s campaign has made them aware of the fact that if they do not have the chance to exercise their democratic eights now, the country they return to some day may not be a place they want to live in.